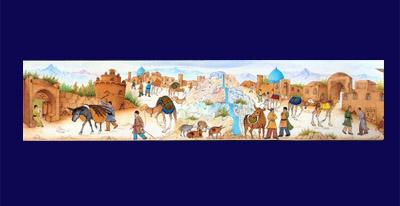 Safavid and Tabriz School
After Shah Ismail came to power and organized the Safavid government many of the artists gathered together in Tabriz and began writing books and Painting presided by Behzad. In Tabriz school people tried to depict all the environmental space into a tiny picture, therefore they filled all the space of scenery. They created polyhedral combination which spread from bottom to top. The colours were harmonized bright, leavened and sensitive. All the components parts are equally necessary and important. Among the particulars of Safavid drawing especially Tabriz is dressing and covering of persons’ heads. In these drawings one red hat called Taj Heidar is seen.
Esfahan school
After Shah-Abbas the great came to throne and chose Esfahan as Capital, he and his successors patronized the artists. Among the painters of this period was Aghamossavar whose works were mostly as single and his style followed the Tabriz school. The other one is Reza Abbasi who based a new style in Esfahan school, paid complete care to nature. He was skillful in nourish the face.
Qajar School
The Painting outset of Qajar began with Afsharian and Zandian, during the epoch of Karim-Khan-e Zand’s reign, oil painting on canvas was fully attended and the painters of Zandian period more emphasis on light and Shade effect and perspective under the influence of the west art.
Painting example of Qajar Style, a combination of wall picture of Safavid and classic painting of Europe. The most different between painting of these pictures. The miniature hands and slim waist are the common aspects of the women in these picture who are mostly dancing, playing instruments and serving wine. The men with eyes, arc-browed eyebrows, short hair and Qajar dress and hat have been painted identical to each other. Kamal al-lmolk and Sami al-lmolk are notables regarding the Qajar style. 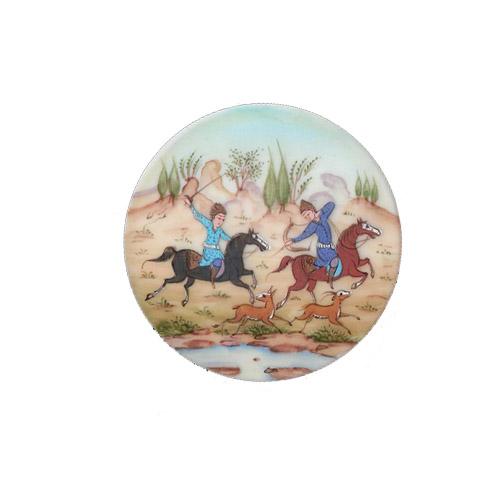