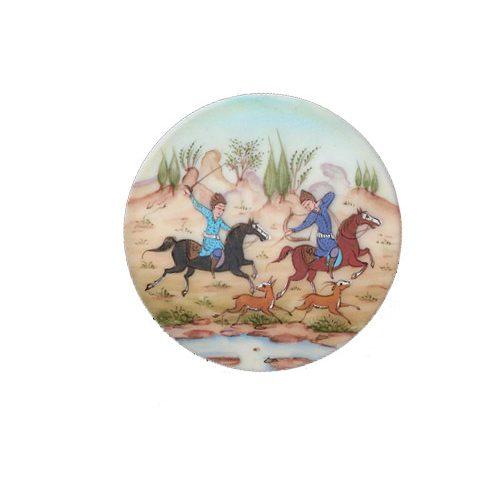 Arabs art could be found in their language rather then in painting, sculpturing or architecture but their prevalence upon the world acquainted them with art and business. Through Abbassids’ take over and the patronage of Iranian, Baghdad was founded as the first school of Painting and painting of books by the Abbassids caliphs when Iranian were holding ministerial offices. The painting of Baghdad school were simple involving some limited sculptures of man and trees. This school was formed upon the Sassanian and Bizance arts containing two groups of book: 1- Scientific books consisting of physics, medicine and astronomy. 2- Books of poem and stories which have illustrated some pleasant tales as book of Kalile-va-Demneh. The most celebrated painter of Baghdad school Abdullah ibn-e Fazl.
The Seljuk school:
During this period illustration of books was preformed by the particular style and manner of the Persians abandoning the qualities promulgated in Baghdad school. Regarding the manuscripts painting was directly done on the pages of the book and the garment were decorated by Arabesque style with floral design ( flower plus plants ). In principal the Mane art influence could be recognized in illustrated manuscripts of this period.
The Mongol school
In this period we witness the influence of Persian Painting which flows from China, since the Mongol were superseded by Chinese culture after conquering China to that extent that they became the disseminator and brought the culture to Iran after they conquered it, but soon the culture was influenced by Persian culture. The vestiges of Chinese naturalism are many during this period such as twisted clouds, mountains, old trees, fictitious animals and beasts and also proportionate pictures.
Herat school
After the infiltration of tamer lane to Iran while taking over any area, he used to send the artists and craftsmen to Samarghand. Therefore the Timurid period counts as one of the most prominent period of Painting in Iran. Finally, Shahrokh came to power and chose Herat as his capital where we witness the acme of Painting art and painting which bricked up by he himself and his descendents. The characteristic of Herat school shows the tendency of portrayers to pay attention to drawings and details of designs and its delicate touch, variety of colours, versatility and their proportion, multiplicity of golden colour and covering the main surface with plants and bushes. The famous painter of this period is Kamal od-din Behzad.